Between the Sheets at Australian Galleries Melbourne 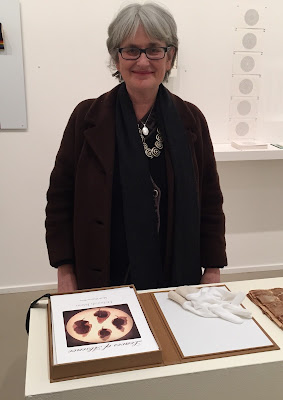 The snapshots above and below were taken on Tuesday night, 13 June, at the lively opening of Between the sheets: artists' books 2017 at Australian Galleries Melbourne.

It was great to catch up with several old friends, including fellow Ballarat artist, Debbie Hill (see below) who had two stunning altered books in the show 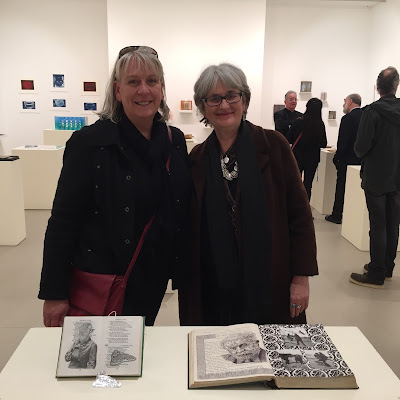 The evening was not without its upsets, however. The first happened quite early in the evening. I was about to show my unbound artist book, Leaves of Absence, to two curators, when I noticed to my horror that someone had gotten there first. The pages were no longer in their correct order - so much so that the colophon page, which is traditionally placed at the end of a book, was near the beginning. Janis Nedela, the exhibition curator, suggested I retire to the back gallery where there was a large table on which I could spread out the numbered pages and carefully restore them to their intended order.

Later in the evening, an artist friend told me of a woman she spotted paging through my beleaguered book with one hand, whilst enthusiastically gesticulating with the other - in which she clutched a glass of wine. My friend looked on in disbelief as the wine splashed ever closer to my book. The horrified artist (to whom I'm forever in debt) marched over and firmly told the woman to put the glass aside until she had finished examining the book. 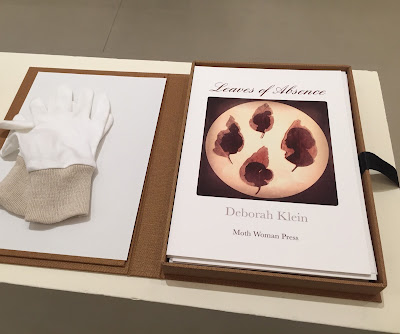 It was my decision that the book sit on an open plinth. In the exhibition's previous venue, it was displayed under a perspex cover, which meant that only a very limited number of pages could be viewed. I'm hoping it isn't a decision I'll live to regret.

Janis was extremely apologetic, but none of this is his fault. He is not a policeman and neither am I. We can't be there patrolling the exhibition every minute of its opening hours. We simply have to trust gallery visitors to do the right thing. For the most part they do, but it only takes one careless, thoughtless person to damage or even destroy an artist's work.

Having said that, it's a terrific exhibition - a must see, in fact - and the overwhelming majority of opening night visitors were respectful of the artist books.

The exhibition runs until 2 July. For full details, go HERE.