A Memo from Sherlock Holmes and a Merry Christmas

When I visited London in October I took along some of my recent zines. The tongue-in-cheek texts of the Moth Woman Vigilantes zines put my old friend Sue in mind of a certain piece of prose written by Yours Truly in 1970s, which she duly fetched. I’d completely forgotten about it, but Sue had kept a copy all these years. Over time it had not only yellowed, but accumulated some appropriately picturesque stains, adding considerable weight to its ‘authenticity’.

In the 1970s I worked for a time in a small office in Soho. It was a branch of the British Library, but there were no books in sight, unfortunately. It was staffed by public servants, most of them delightful people. The lone exception was one Mr Stokes, who took himself - and everything else - way too seriously. My colleague Angela and I operated a two-position switchboard, rather like one of those old fashioned contraptions with cords and plugs that you sometimes see in old movies. We were notorious for bringing our coffees into the switchboard room, leaving the empty cups and saucers on top of the switchboard and when we ran out of space, strewing them all over the remaining furniture. I must admit we did accumulate rather a lot of them. It got to the stage that the staff cafeteria in the basement started to run out of crockery. The case against us was indisputable - our guilt was there for all to see by anyone passing our glass walled room, including Mr. Stokes. But instead of quite rightly telling us to return the lot without further delay, he posted a wordy, unbearably pompous office-wide menu concerning the disappearance of Civil Service crockery. I had just begun to fully appreciate the Sherlock Holmes stories around that time, having recently purchased The Adventures of Sherlock Holmes in an op shop in Balham (I still treasure it). In the guise of Mr. Conan Doyle’s immortal sleuth, we sent a memo in response. In the spirit of the Silly Season, the infamous document is reproduced below. 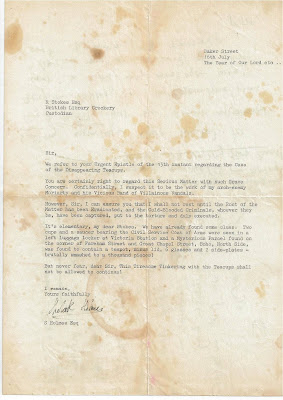 It reads as follows:


Sir,
We refer to your Urgent Epistle of the 13th instant regarding the Case of the Disappearing Teacups.
You are certainly right to regard this Serious Matter with such Grave Concern. Confidentially, I suspect it to be the work of my arch-enemy Moriarty and his Vicious Band of Villainous Vandals.
However, Sir, I can assure you that I shall not rest until the Root of the Matter has been Eradicated, and the Cold-Blooded Criminals, whoever they be, have been captured, put to the torture and duly executed.
It's elementary, my dear Stokes. We have already found some clues. Two cups and a saucer bearing the Civil Service Coat of Arms were seen in a left luggage locker at Victoria Station and a Mysterious Parcel found on the corner of Fareham Street and Great Chapel Street, Soho, North Side, was found to contain a teapot, minus lid, 6 glasses and 2 slide-plates - brutally smashed to a thousand pieces!
But never fear, dear Sir, This Tiresome Tinkering with the Teacups shall not be allowed to continue!

Once the memo was placed on Mr. Stokes’s desk, we accurately timed almost to the second the time it would take him to come directly to us – less than a minute. However could he have suspected us? (Admittedly we did have a history of teasing him). We denied everything with admirably straight faces. He left in frustration, but we saw him hiding behind a partition waiting for Angela and I to crack up when we thought we were alone. Although he tried the same thing intermittently for days afterwards, we never did.
POSTSCRIPT AND SEASON’S GREETINGS
We assure our readers that we have matured considerably since the heady days described above and always wash up our empty coffee cups – or at the very least return them to the kitchen for our other half to wash.
Moth Woman Press wishes everyone a Merry Christmas and a New Year filled with wonderful books and zines.
Posted by Deborah Klein at 3:17 PM

Deborah Klein
I am a visual artist who makes paintings, drawings, prints and book art. In 2009 I founded Moth Woman Press, through which I publish my zines and limited edition books, beginning with ‘There was once… The collected fairy tales’, a small anthology of thirteen original stories illustrated with my prints, paintings and drawings. Formerly Melbourne based, I now call the Victorian Goldfields City of Ballarat home.