Of Moths and Masks 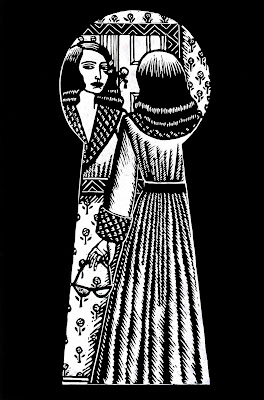 Behind Beauty’s Masks: Works by Deborah Klein by Inga Walton appears as a feature article in the current Etchings magazine, Issue 10: The Feminine. This major piece covers in considerable detail the film noir series (I was chuffed to discover a footnote devoted entirely to my favourite femme fatale actress Claire Trevor,) the works loosely titled Locks and Braids, through to those elusive hybrid creatures so far captured in the current Myth-entomology project.

Most significantly, this is the first time an article focusing on my work has discussed the stories, since published by Moth Woman Press, that have come out of the imagery, including the limited edition book There was once… The Collected Fairy Tales and The Moth Woman Vigilantes zines. The latter are partly derived from those hard-boiled dames that are such an integral part of Film Noir (see image above left). As I am quoted in the article “Are they [The Moth Woman Vigilantes] on the side of good or evil? This is entirely in the eye of the beholder…It’s fairly certain we haven’t seen the last of them!” This prophecy has proved to be entirely true, as I’m currently in the early stages of developing three new stories about the notorious Vigilantes – although at this point, I’m still not completely sure which side of the law they are on.

Etchings magazine is now published twice yearly. Issue 10 will be launched at Readings Bookshop in Acland Street, St. Kilda on Thursday April 19 between 6.30 - 8.30 pm. Further details can be found on the Ilura Press website.

An excerpt from the article can be previewed HERE.